Details: Shea butter, aloe vera and pure fragrances combine to grace this powerful cleansing soap with the luxurious and delicious scents Michel Design Works is famous for. The generous 17.8-ounce size of the foaming soap offers great value without sacrificing quality. Beautifully packaged with Michel Design Works signature medallion in an elegant square container. Michel Design Works was created by Bruce & Deborah Michel in the early 1980s. The first product was an elaborate "memory book" called Our Country Diary. Still a favorite today, it is filled with vintage artwork, quirky quotes, notable dates and plenty of room to record all the events of the year. Our Country Diary will become a beautiful record of your family life. When they first created their signature elephant logo, it signified a remembrance of all things special. Although Michel Design Works has greatly expanded into bath & body, home fragrance and decor, when Bruce & Deborah remember and celebrate all of their wonderful customers and the company's history, it is even more fitting today! Whether you are a new or a long-time friend, we welcome you to enjoy the art, lather up with our English soaps, set an elegant table with napkins, candles, plates, and serveware, and end your day with wonderfully fragrant bubble bath.

Price is ridiculous so it's an occasional treat. But it's the best scent I've ever found. Also, hands were cracked and bleeding from using a cheap soap. Within a week of switching to this one, hands were healed and moisturized without taking any other action. Ordered 3 more after trying one bottle. Probably won't buy again because of the price, but as far as the quality of the product, I only intended to splurge once but bought more at ridiculous price point bc I REALLY wanted more.

The item arrived fast. It was as described. Thank you.

Let our customers speak for us

I bought this as it has a vivid Lemon smell, which I enjoy, will buy this product again.

These cookies are buttery and contain tangy fruity centers. I absolutely enjoyed every crumb.

This fudge is very good. Not too sweet with a great whiskey flavor and traditional graininess. I gave these to my husband for Father's Day and he was pleased with them. Very fast delivery and great customer service.

Gifted this to my Mom for her 90th Birthday! She is so excited! We have had more fun looking up the coordinates on google earth and actually seeing the spot! I included a few other German things. She said it is the best gift she has ever received! 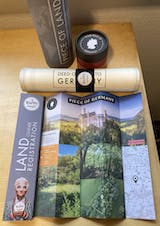 Arrived on time and liked so much I ourchased two! Great transaction & many thanks!